Lessons You Can Learn From The Sudden Collapse Of Atari 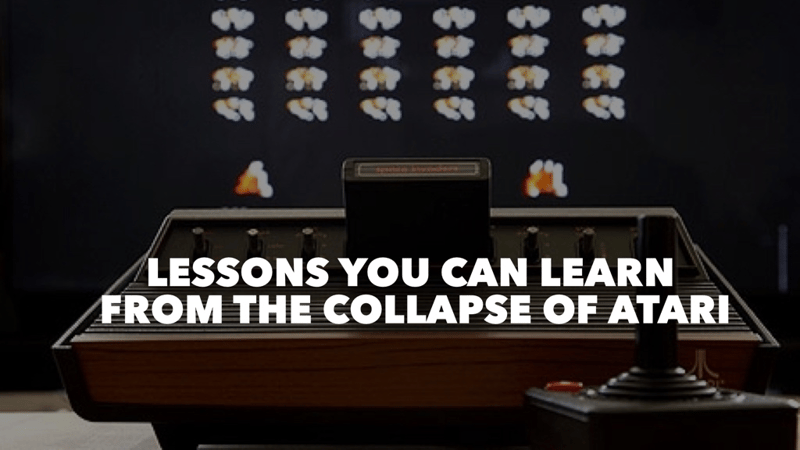 Like most babies of the 60s and 70s, we as kids were startled by the arrival of Pong and coin-operated video games, and eventually the king of the home TV, the Atari 2600 video game system.

I remember tracking off to department stores during school holidays to play space invaders (for free!) and the latest 2600 games, scheming on how an 11-year-old could earn $300 to purchase one.

Non-believing parents were more determined to throw me outside to play rather than invest in my digital future at the time!

Atari was an amazing company in the 70's. Even Steve Jobs and Woz got their start by creating Breakout for Nolan Bushnell and Ted Dabney.

The Atari 2600 launch took the world by storm and pretty quickly grew to a company with hundreds of millions of dollars in revenue and over 10,000 staff.

But in 1983, the North American Video game boom collapsed. It crashed. Oversupply and inexpensive new computer technology caused the crash.

Cruising Netflix the other night, I watched a documentary about the death of Atari. "Atari: Game Over". It was a quest to uncover thousands of Atari 2600 game cartridges, including the ill-fated ET video game, all buried in a New Mexico landfill.

The document focused on the archeological dig to discover them while telling the story of the crash of Atari.

It was an interesting insight into how quickly the video game revolution came and went. Computer technology evolved so quickly that in the space of a ten-year period, Atari built the coin-op business from scratch, invented the home video console, then collapsed to the rapidly evolving home computer market.

New computers such as a Commodore 64 made it impossible for the Atari video game platform to compete. It collapsed, and all the cartridges ended up dumped. So watching the documentary, with the benefit of hindsight, I thought of the parallels to today's world.

Business at the Speed of Light

The convergence of information technology and marketing, social media, the cloud and the internet is driving business at the speed of light.

Atari was too slow to see computers coming. Too big to adapt to the next new thing. Just like Atari, the observation we see daily is slow, dated marketing methods and sales practices are costing business thousands of dollars in lost opportunity, and for some it will cause collapse.

Doing business on the internet these days is fast, without barriers and global.

With a mobile phone and a laptop, you can do business with anybody in the world, anytime.

Cloud software and the internet delivers thousands of solutions at the touch of your fingertips, and at a fraction of the cost of traditional methods.

So is your business keeping pace?

For example, the social media world is creating entirely new types of consumers. So much so they may as well be on a different planet. If your business is not getting social, then are you going to be able to market to your sons and daughters as they become the next generation of consumers?

At The Kingdom, we now implement a powerful tool called HubSpot. It is part of automotive marketing platform category, growing like wildfire in The United States.

The opportunities for Australian business are there right now to get this platform working ahead of the other slow to move opposition.

The advantage of HubSpot

Many businesses we speak to are excited by HubSpot. It gives you the chance to take control of your digital marketing future, grows engagement and gives you powerful transparency into your digital assets.

HubSpot is a tool that will put you out in front of your competitors and give you the advantage to protect yourself from the future changes in the digital marketing and social media world. In so many ways, it puts to shame traditional, old-fashioned marketing methods.

Is your business ready to take advantage of the slow-moving opposition and get a potentially unassailable lead in your market?

HubSpot is a powerful program. It takes an investment, a fiscal and resource dedication. In presenting HubSpot, along the way we often come across conservative people, which say great idea, but are not willing to change their old ways or invest in a changing world. It reminds me so much of Atari, and their inability to keep pace.

It was sad to see Atari have their unsold cartridges dug up from the depths of the earth. Don't let your business go to landfill, while you still have the chance to break ground.