6 Reasons You Need To Stop Monkeying Around With WordPress

So, you’re sitting there, browsing your WordPress admin screen, batch deleting today’s 958 spam comments, while you’re searching for that plugin you really need in another tab, hoping that it’s still free, supported and not bloatware.

This is your life now. When you’re not waking up in the middle of the night with a cold sweat, wondering if your site has been brought down again by that hack you can’t get rid off, you’re anxiously asking yourself if anyone is even visiting your site at all.

There is a better way - the HubSpot way. The Inbound way. I’m going to show you 6 reasons why HubSpot is the way forward as far as marketing your website online is concerned. Strap in, some feathers are going to get ruffled.

Blogging in WordPress is a fairly simple affair - which can be both a blessing and a curse. Mainly a curse. When you want to write an article, you’re essentially presented with limited options (depending of course on which theme you’ve purchased, which plugins you’ve installed, and if your website hasn’t been hacked in the last 24hrs).

It's essentially a cookie-cutter layout which does its job perfectly well for the weekend blogger, who doesn’t particularly care if or where they rank on Google when they write their 98th obscure post about that thing you don’t care about.

HubSpot’s blog design was based purely of alterations which Google had made to their search result algorithms, and upcoming trends in social search and responsive design - not to mention the fact that it’s seamlessly integrated with all of the other tools in HubSpot’s ever expanding utility belt of marketing goodies.

Out of the box, WordPress comes with approximately zero SEO tools. Yes, it offers a myriad of SEO plugins, but it would take lots of time, effort and potentially cost to find a plugin that would work anywhere near as effectively as HubSpot’s system.

HubSpot is totally grounded in SEO - as mentioned earlier - the entire COS is practically a love letter to Google’s recent shift in the way they rank pages.

Another step towards SEO glory that HubSpot have taken for the customer, is free SSL. Thats right, free SSL for all. The reason why this is so important is covered in this article:

Whenever someone asks me to describe HubSpot to them, I generally begin with the following line:

Imagine if Google Analytics, Mailchimp and WordPress had a lovechild; that lovechild would be HubSpot.

I say this because HubSpot is like the perfect unison of those three different platforms - except instead of being an unorganised mess, it becomes this synergetic cornucopia of analytics right across the board.

HubSpot records and analyses everything that happens on, and from your website - including visitors that come to see your site, or emails that you send out to potential customers - you even get to see which pages are getting clicks, and which keywords you should try to gear your next blog post towards.

WordPress on the other hand, can show you a handful of useful facts about views, visitors and where they’re coming from - orders of magnitude less than HubSpot's analytical output.

Lists make the world go round in HubSpot - they allow you to store all-important contacts, which essentially opens the way to the rest of HubSpot's bristling array of marketing artillery. Sadly, WordPress doesn’t offer contact lists out of the box - what's worse is that support for such features in the WordPress ecosystem is hard to come by.

Add to this that it also doesn’t offer email by default either, and things start to get a little glum. Don’t get me wrong though, there actually are some adept email apps out there for WordPress, but nothing as lovingly integrated as HubSpot’s email system - which lets you play with fun things like personalisation per recipient, SEO optimisation and more.

Again, its a story of in built functionality, versus acquiring said functionality by use of 3rd party plugins. In this scenario, there are plenty of plugins out there for WordPress which can do the job - none however seem to have as thorough a list of features as HubSpot’s Social Inbox.

In this Social Inbox, customers can create a segmented stream of tweets based on customers, or anything else. You can stalk keywords, too. It can also help you essentially see someones life-cycle journey through the transparent film of their social media.

I’ve saved the best for last here. Well, the worst for last as far as WordPress is concerned, at least in terms of our experience with it. In the past, we’ve had issues where we’ve had WordPress websites hosted on a shared hosting environment - which is essentially like swimming in a public pool:

It can be chlorinated to hell and back, but anyone can get in, and it's just a matter of time until something you can’t un-see floats past you.

If that analogy wasn’t obvious enough, let me elaborate: Many shared hosting environments, will host your WordPress site without a problem, and most likely serve it at a great speed - however, unless you’re paying through the nose for an additional layer of security, or you’ve installed or purchased security in the form of a plugin specifically for your copy of WordPress, OR you manage to keep your copy updated all the time, there is a chance someone will get in.

More often than not its not even necessarily a direct attack on your site, but a root-kit or a backdoor left in someone else’s.

This isn’t a problem with HubSpot - they have a veritable shopping list of terms which will literally lower your blood-pressure and cholesterol when you hear them - “Dedicated firewalls”, “Enterprise-grade Intrusion Detection Systems”, “Web Application Firewall”, “DDoS Mitigation Services”, the list goes on.

Now, the above might sound a little harsh - and it only sounds that way because many a time, it was I who was asked to breathe life into a virgin WordPress installation, or trawl countless plugins and themes, or deal with tech-support across the globe as a client’s site would get hacked for the sixth time that week.

WordPress isn’t the lurching monstrosity this article might paint it as, but it certainly isn’t the only option out there as far as marketing your business online is concerned - there is a better, newer way to do this, and that way is HubSpot.

Speak with The Kingdom today to find out how you can get the monkey that is WordPress and it’s cohort of endearing, but ultimately frustrating qualities off your back, and get with the times. Sign up for a Hosting Health Check below. 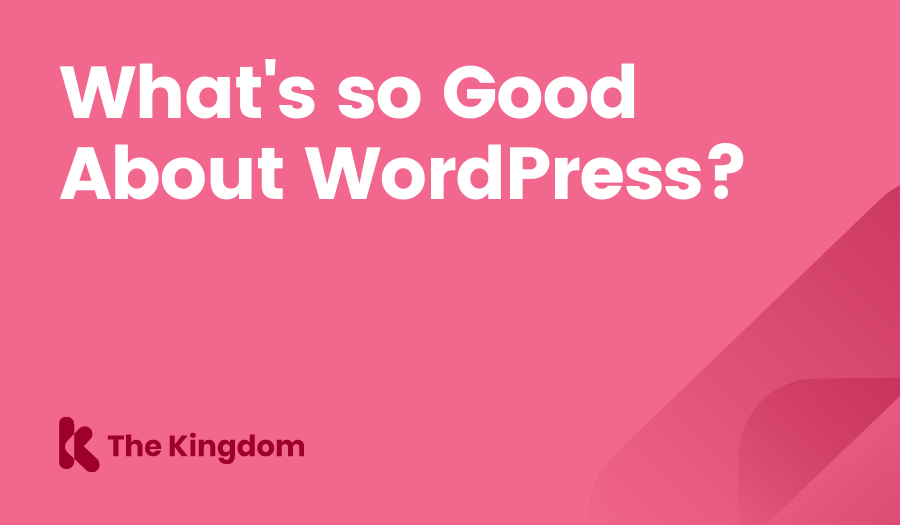 It's suggested that WordPress powers over 20% of the world's websites. So what's all the fuss about? The Kingdom are ...

We’ve all heard it before. The endless, tedious wheedling. Any successful entrepreneur worth their salt has heard that ...

Employers, marketing managers and fellow developers -  are you fed up with the idiosyncrasies of WordPress, but aren't ...